Since oysters are relatively small, the average size of saltwater pearls (Akoya Pearls) varies from 2 to 9 mm. Originally cultured in Japan, the so-called akoya pearls were the most popular saltwater pearls for almost a century. Until the 90s the production was controlled by Japanese companies. As from 1990, China started cultivating Akoya pearls in remarkable quanties which meant serious competition for Japans production fairly soon. [... more]

prices include VAT, and P&P
Pinctada fucata martensii, is the nomenclature for the double-shelled mussel of the species Pteriidae, used to cultivate Akoya cultured pearls. Saltwater pearl cultivation starts by implanting a perfectly rounded mother-of-pearl nucleus along with an irritant into the oyster. Only two, maximum four nucleuses can be hosted at the same time, while freshwater pearl cultivation allows implantation of several more. Tahitian pearl cultivation allows one nucleus per mussel only. After the harvest, Akoyapearl producing mussels will not be nucleated again. Untreated akoya pearls are mainly cream coloured, yellow or green. The pearls displayed in shop-windows are the result of a sophisticated treatment applied to eliminate impurities. Shapes vary from round, ovate, button-shaped, drop-shaped to baroque. The Value of Akoya pearls depends on their size, shape, colour and luster, as well as on the composition of their surface. For a pearl necklace of exceptional quality made of pearls measuring 8-9 mm, one has to part with a couple of thousand dollars. 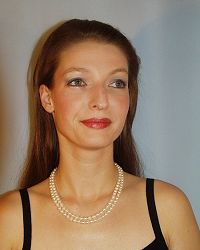